Cross-posted at my Orange Orb blog on Word Press, cartoons from the past. I did the cartoons decades ago, here's one of "Pongo," a cartoon dog who sees his first UFO. More at Orange Orb. 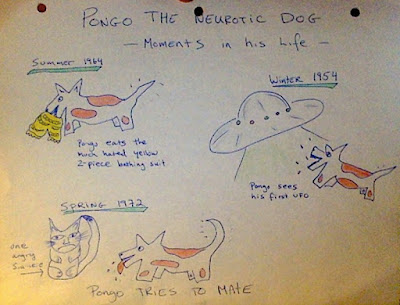 Random Yet Not Unsurprising Sketch

It's been way too long since anything has appeared here at Alien Art Genre! Reposting what just went up at the Orange Orb.


Random Sketching, and Looked What Showed Up


Didn't mean to, it just came out that way. The ubiquitous aliens-in-the-bedroom drawing. Here's the original: 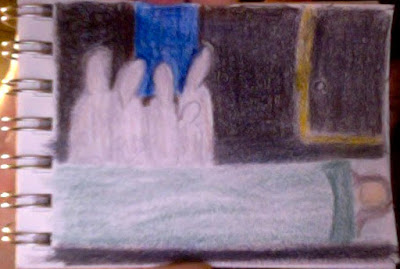 And then I played around with the color enhancement thingie and this felt right (as if there is anything "right" about this realm.) 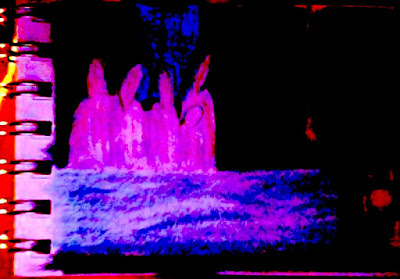 We've seen these before; these drawings of faceless, ghost like beings peering down at us while we're asleep and unaware of the presences surrounding our beds.

I've written before that I have memories of little "wolf like" (gray, short, jabbering) beings surrounding my bed when I was a child. Jim, my spouse, has had similar experiences. (The Synchronicity of Puppet Wolves: Binnall of America 2007)

In looking at this sketch, I realize these entities are not all that short -- not the typical gray alien so commercialized and now a non-event in pop culture. The gray has replaced the little green man from mars as cartoon. Prevalent and used to promote all manners of entertainment. Yet there is one little guy (that's how I think of him, without thinking of him…)

What does all this mean? I'm not to say. I don't know. This not knowing annoys some. As if, because I've had these experiences, I should somehow know. I wish to hell I did know. But I'm not a prophet. I have some theories that are in constant stages of movement. A dance, and all performers come together in one beautiful display but abruptly break apart, flowing back into an alleged chaos. I continue to research and speculate and explore with others their experiences, but I don't know. I guess. I dream. I draw.  I manipulate the memories, hoping to evoke some truths out of what's hidden inside.

time is Time is

disbelief
snorts out its fear
its arrogance a cold cloak

time is Time is
missing, not lost
withheld
in a floating orb

where is the dreamtime, i mean
what space
where is the marker
to let us know if we know
recognize
were, are, or will be

where are the parts
we don't remember

the silver cord, now snapped back
releases these dreamscapes
floating
like lotus leaves
on green water

I like this poem by my friend Edward, who graciously allowed me to post it here at Alien Art Genre. I like the rhythm of this poem, as well as the imagery and language. Well done Edward! I hope he has more, would love to share them here.


A Fortean and creative idea; taking old paintings one finds at Goodwills and the like and painting in monsters. Something I will definitely play with! Adding Monsters to Thrift Store Paintings from TwistedSifter
Posted by Regan Lee at 4:40 PM No comments: 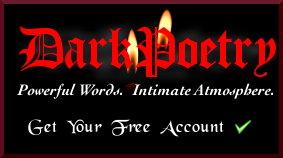